While it is a widely accepted fact that the world pandemic known as COVID-19 (coronavirus) began in a wet market in Wuhan, China, WAN and Peace 4 Animals turned to their partner Wildlife SOS for further insight into the situation during this perilous time.

As previously reported by WAN, a wet market is a place where live animals are sold as food, including a variety of exotic wild animals. Most wild animals are illegally trapped or poached in the wild and brought in through the international black market. Some wild animals like minks, bears, and civets are bred in captivity in some version of a factory farm. 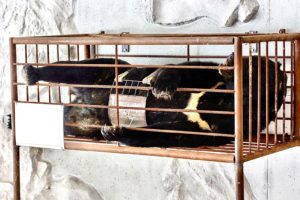 Now, three months later, almost 200 countries have reported the virus outbreak, over 40,000 innocent people have died, and countless people have been infected. This pandemic is just getting started and it is impossible to comprehend what the final human and economic toll will be around the world. The worst part is, this virus was preventable. World leaders had been warned by experts that a tragedy like this was imminent, if humans’ relationship with wild animals did not change.

Initially, China’s leaders made announcements that sweeping changes would be made to outlaw these wet markets and eliminate the consumption of wild animals. While this is to be celebrated, it needs to be understood that this governmental stance does not include abstaining from using wildlife in traditional Chinese Medicine. This has become abundantly clear recently when China began promoting using Tanreqing in the treatment for COVID-19. Tanreqing is a compound that has bear bile as one of the active ingredients.

Kartick Satyanarayana is a bear conservationist in India, which is home to four species of bears. He has been running anti-poaching teams for over 20 years and expressed alarm over the Chinese government’s recommendations to continue to use bear body parts in Chinese medicine.

“In a time where people are scared and desperate, it is outrageous and reckless that China would promote bear bile and further exploitation of bears as a treatment,” said Satyanarayana. “This puts bears all over the world at risk of being poached for their gall bladders and becoming another victim of the coronavirus from international wildlife trafficking.” 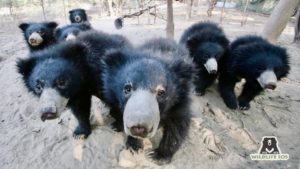 But the tragic suffering and loss of life doesn’t stop with those contracting the virus. The Chinese government is promoting treatment with no clinical basis for success. People who have contracted the disease AND bears will suffer, when much more effective treatments are available. Treatments that cost less, help more people, and are more widely available. Read the CDC’s recommended treatments for COVID-19.

Satyanarayana, who also has a lot of experience rescuing bears that have been seriously abused expressed horror at what this would mean for captive bears. “Bear bile farming is an unusually cruel practice seen in China and Southeast Asia that involves extracting bile from living bears. Bears are condemned to live in small cages and have catheters inserted into their abdomen to extract the bile. For cubs doomed to be raised in this situation, this can be their tormented life for up to 25 years,” continued Satyanarayana. “The Chinese government advocating bear bile as a cure for COVID-19 spells doom for more bears.”

Before the outbreak of COVID-19, bear poaching was a rampant and well-documented international problem. Ironically, China is promoting the same trade in wildlife that likely created COVID-19 in the first place.

Now, China has advocated using bear bile for treating the virus, placing a target on every bear in China and around the world. Bears and other wild animals should not be an additional casualty of this virus.

China should not only desist in recommending Tanreqing as a treatment for COVID-19, but should take the added step of publicly outlawing and enforcing a ban of any wild animal products in Traditional Chinese Medicine. It isn’t just the bears and other animals that would benefit from this action. Humans would benefit globally, as well!

The post WAN Exclusive: Wildlife SOS Calls On The Chinese Government To End The Use Of Bear Bile For COVID-19 & Traditional Chinese Medicine appeared first on World Animal News.

Victory! A Court Order Rules That Yellowstone’s Grizzly Bears Will Remain Protected From Hunters Under The Endangered Species Act