The first time Ben Johnson met Dash as a shelter volunteer, he assumed the brindle pittie would be wary of strangers. But all Dash wanted from Johnson was a nice, long hug.

“I met him in the back room of the humane society,” Johnson told The Dodo. “I squatted down so I didn’t appear intimidating. He walked over to me, put his head in my chest … I put my arms around him for a hug for about 10 minutes.”

“Every time I saw him after that he would push into my chest until I hugged him,” he added. 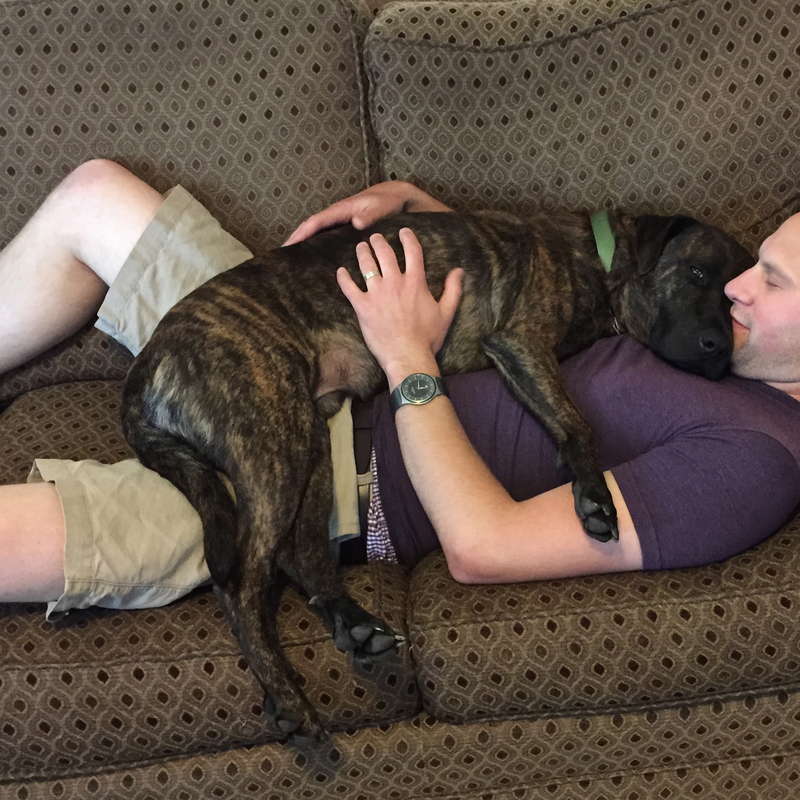 That year, Johnson decided to sponsor Dash for his local shelter’s charity walk. It was so hot outside that the shelter gave him permission to take Dash home for an evening of relaxation outside the kennel.

Dash was grateful to be in a quiet home and spent the night snuggling on the couch with Johnson’s Lab mix. 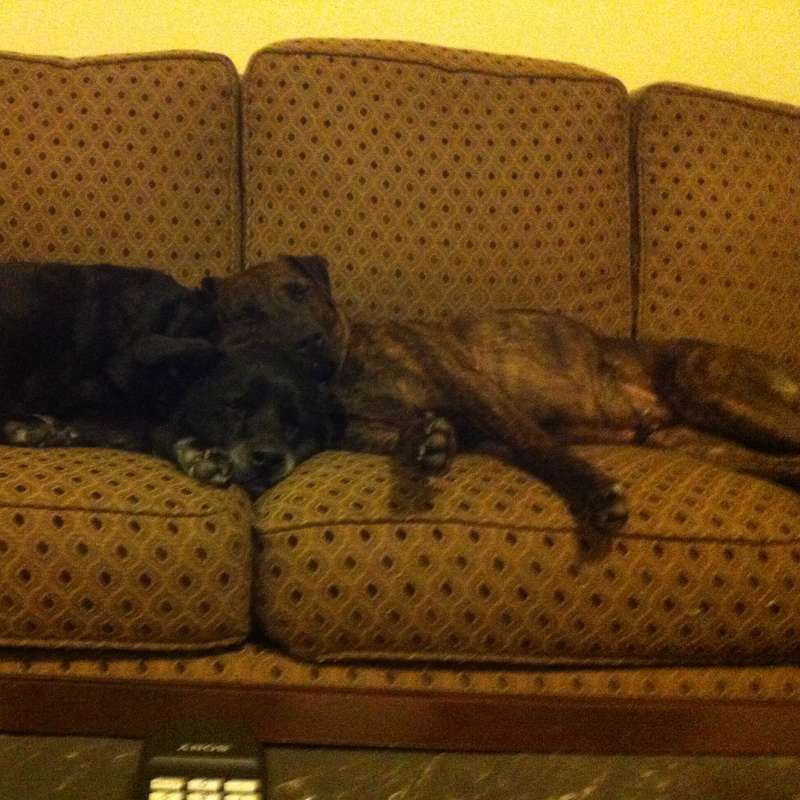 The next morning, at breakfast, Johnson couldn’t find Dash. He searched the house until he peeked into his 5-year-old son’s playroom. There, he found the dog in the most unexpected position.

“Our son had a Fisher-Price tool set out and was giving Dash a dental exam with a plastic screwdriver,” Johnson said. “Dash laid on his back with his mouth open while our son gave him a full exam. It was at that point that we realized he was never leaving our home.”

Since Johnson permanently welcomed Dash into the family, the pittie has continued to be his gentle, loving self. 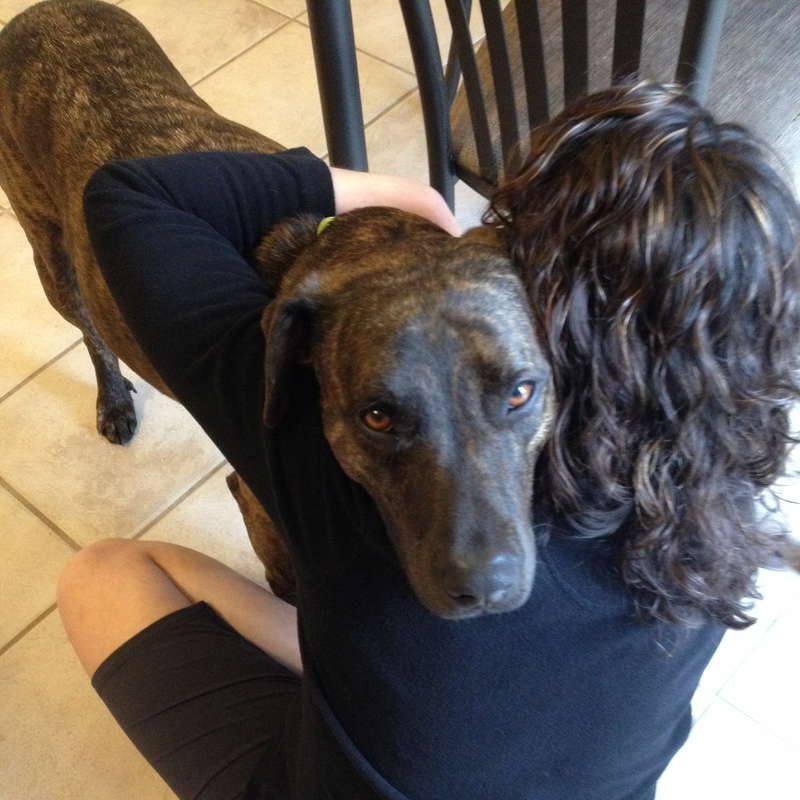 Dash likes to start his day with a hug before tucking into his breakfast.

“He has engaged in the pre-breakfast hug routine for a couple of years now,” Johnson said. “When putting his bowl down, he will wait to eat, wag his tail, and glance over at you until you hug him.” 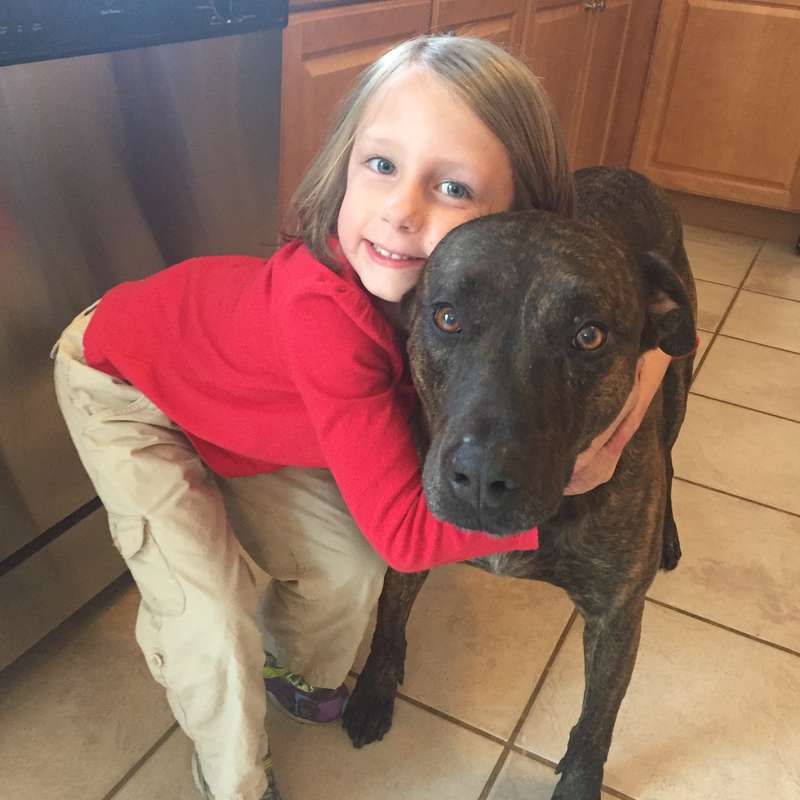 “He requires at least one hug, sometimes two, and occasionally will stop mid-meal for an extra hug,” Johnson said.

The Johnson family is happy to give Dash as many hugs as he needs before meals. The sweet pittie shows them so much love in return that it seems only fair.

Are Dog Hiccups Normal? Find Out When You Should Worry.

Cat Sneaks Over To His Neighbors' House Every Night For Sleepovers

Woman Without Grandkids Knits A Sweater For Her 'Grand Cat' Instead