Multi-award winning actor Joaquin Phoenix, showed his support for the important legislation, and musician Moby spoke at the Los Angeles press conference. 35,000 cities in the U.S. were also called to join Los Angeles to protect the lungs of our earth.

The motion officially making the call, by Koretz and Ryu, was approved to condemn the destruction of rainforests around the globe and ongoing violence against the Indigenous peoples who protect the Amazon. The original legislation was introduced in November in partnership with New York City Council Members Costa Constantinides and Justin Brannan, and with Brooklyn Borough President Eric Adams.

The Los Angeles City Council also issued a resolution of support for the new California State bill, AB 2002, The California Deforestation-Free Procurement Act, which was recently introduced by San Jose Assemblymember Ash Kalra and co-sponsored by Peace 4 Animals. The Act would leverage California’s purchasing power to mandate No Deforestation policies and practices at companies that do business with the State of California.

“Today, as the City Council takes this historic step, we also call upon the other 35,000 cities in the United States to join us in our divestment from Brazil, from its cattle industry, and from the reckless corporations profiting from deforestation, Indigenous murder, and climate madness. If we lose the Amazon, we lose our critical carbon sequestration defense, and we lose the climate fight. Period,” said Los Angeles City Councilmember Paul Koretz. “Let’s see, if by year’s end, our entire country can join us and show the Brazilian government how much we honor, respect, and vitally need the Amazon Rainforest and its Indigenous Peoples for a healthy climate and our continued well-being.” 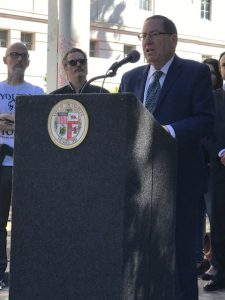 Sadly, forest fires throughout the Amazon have jumped 80% since last year due to cattle ranching, putting vital resources and lives at risk. The Brazilian National Institute for Space Research recorded over 41,000 fires throughout the country as a result of this clearing.

The Amazon’s trees play a vital role in absorbing carbon dioxide emissions; without them, those emissions are left to exacerbate climate change. Matters stand to only worsen with the demand for meat. This is especially true in regards to beef, demands for which increase 5% each year in South America, according to the U.N. Food and Agriculture Organization.

“We only have one Amazon rainforest, and we all have a role as consumers and global citizens to protect it,” said Councilmember David Ryu. “We have lost nearly a quarter of our rainforest to fires that were started to make way for ranch and farmland, and we must recognize the role our economy plays in that destruction. Now, Los Angeles is taking a stand for our rainforest, for our planet, and for ensuring the products we buy are not sourced from the ashes of the Amazon.”

“For many of us, the Amazon seems so far away, but this motion is a bold step for the City of Los Angeles to take tangible steps in preventing the deforestation of the Rainforest, said Linda Escalante, Southern California Legislative Director for the Natural Resources Defense Council (NRDC). “The Amazon helps regulate the global climate and provides critical habitat for multiple species. As we face a biodiversity crisis and the threat of losing up to one million species due to human activity, it is important for everyone to help.”

“This legislation is also exciting and revolutionary for a reason even beyond helping to save the Amazon Rainforest. It represents a new paradigm in economics, Economics 2.0, where corporations are finally held responsible for what economists call negative externalities, in other words, ‘Honest Accounting’ where the true costs are included in the products they sell,” said Richard Greene, Author and Political Communication Strategist. “Nature has value. Cutting down the Amazon to raise cows has a cost beyond the cow itself. A McDonald’s or Burger King cheeseburger costs far more than the $2.79 these corporations charge for it, possibly $5 or even $10 more, per burger, when we factor in the full costs to Indigenous peoples, to biodiversity and to climate.”

The motion approved by the LA City Council calls on all City departments to eliminate the purchase of products, contracting with or investing in firms that engage in the deforestation of the Amazon Rainforest or the killing of Indigenous people who live there.Speakers at the rally also called on Angelenos to take a stance by reducing how much meat, dairy, and eggs they consume. Our current U.S. diets stand to drive up the global temperatures higher than the Paris Climate Agreement targets, largely because they include high levels of animal products, according to a 2014 study.

Help us continue to bring you the latest breaking animal news from around the world and consider making a Donation Here! www.peace4animals.net/donate

“One Person CAN Make A Difference”

Breaking! More Than 300 Elephants Have Mysteriously Died In Botswana With No Evidence Of Poaching

Urgent! Public Comments Needed By July 6th To Stop The Use Of Anticoagulant Rodenticides That Are Killing Mountian Lions & Other Species Of Wildlife In The U.S.

Breaking! Animals Asia Rescues A Bear Named Cotton Blossom That Was Held Captive In A Barren Cage For Over 14 Years In Vietnam